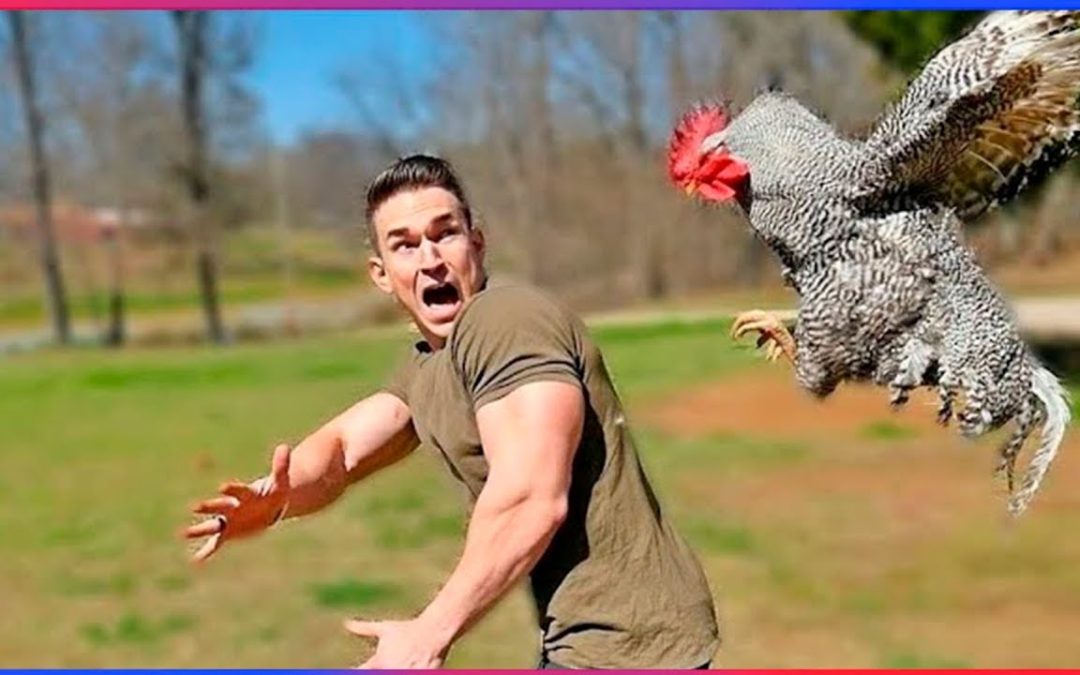 0:26 – An attack from this wild boar had this guy running for his life like how
characters in the cartoons react

1:28 – He better count his fingers after taking the video and make sure they’re all
there because these camels might end up eating more than just the food
he’s handing them

2:25 – Who you got your money on for this match up , goose vs dog? Its clear
that she’s not confident going up against that angry bird

3:01 – Her friend warned her multiple times before getting attacked but she
wasn’t able to escape the wrath of the Canadian goose. You can run all
you want but wings will outpace legs any day

4:07 – This boy deserves an award of bravery for choosing to stand up to his
fears. His screams made the emus decide to wait for the next car in line

5:13 – Just another normal day in the desert. Feeding cats and dogs is easy but
how about feeding some hungry camels that have 0 respect for personal
space and boundaries

6:13 – A surprise scare by a camel has him wishing he spent his day doing
something other than going to the safari

6:48 – In the video, the boy can be heard screaming as he tries to dodge the bird
which repeatedly pecked him on the shoulder and followed him down the
road. His dad recorded the whole scene

7:55 – If you think being a human is hard, try one day in the animal kingdom. It’s
every animal for themselves

9:34 – After the first strike, his father filming couldn’t help but laugh at the
encounter. The magpie seemed to take the laughter as insulting and goes
in for another attack but the boy continues to laugh it off

10:26 – Despite the sign in front of her that clearly reads tame eels, the eels
ignore it to get a taste of some human flesh. They may not have been
successful but at least they get a free iPhone

11:24 – You just wonder if the guy regrets letting the deer escape from the trap
after being greeted with an attack instead of a thank you

12:15 – The last thing you want to cross paths with during your day is a goose that
wants to pick a fight for no apparent reason

13:13 – Aquarium cleaner versus ninja turtle. The turtle tries a snap attack but the
diver responds back with bubble beams

14:09 – Each day is full of surprises, you never know what you might run into. For
this lucky dude, he has no idea that he’s about to encounter a wandering
black bear in just a few seconds

We use cookies on our website to give you the most relevant experience by remembering your preferences and repeat visits. By clicking “Accept”, you consent to the use of ALL the cookies.
Do not sell my personal information.
Cookie SettingsAccept
Manage consent

This website uses cookies to improve your experience while you navigate through the website. Out of these, the cookies that are categorized as necessary are stored on your browser as they are essential for the working of basic functionalities of the website. We also use third-party cookies that help us analyze and understand how you use this website. These cookies will be stored in your browser only with your consent. You also have the option to opt-out of these cookies. But opting out of some of these cookies may affect your browsing experience.
Necessary Always Enabled
Necessary cookies are absolutely essential for the website to function properly. These cookies ensure basic functionalities and security features of the website, anonymously.
Functional
Functional cookies help to perform certain functionalities like sharing the content of the website on social media platforms, collect feedbacks, and other third-party features.
Performance
Performance cookies are used to understand and analyze the key performance indexes of the website which helps in delivering a better user experience for the visitors.
Analytics
Analytical cookies are used to understand how visitors interact with the website. These cookies help provide information on metrics the number of visitors, bounce rate, traffic source, etc.
Advertisement
Advertisement cookies are used to provide visitors with relevant ads and marketing campaigns. These cookies track visitors across websites and collect information to provide customized ads.
Others
Other uncategorized cookies are those that are being analyzed and have not been classified into a category as yet.
SAVE & ACCEPT